How is Asthma diagnosed and treated?

Asthma is a condition of recurrent inflammation & obstruction of the airway that causes recurrent wheeze, cough and shortness of breath. Asthma is usually managed successfully by your GP without need for referral.

The risk of asthma is increased by:

Why is Asthma often difficult to diagnose

Asthma is often far from a straightforward diagnosis to make. Why?

What is Viral Wheeze?

Around half of kids under 5 will wheeze at some stage and the majority do not have asthma.

Infants & Toddlers often wheeze only with a viral infection and this is termed “Viral wheeze.”

Most viral wheeze does not turn into asthma, and the affected kids are well in-between episodes. Viral wheeze may be treated with a “reliever” inhaler usually used for asthma.

How can I tell that my child is likely to have Asthma?

Asthma is also more likely if the symptoms seem to be triggered by laughing, exercise, damp air, cold air or exposure to pets. Recurrent symptoms without obvious features of a cold or viral infection are also suggestive.

Ultimately, the diagnosis of asthma is made by the doctor following observations made over a period of time.

Are any tests needed?

One of the most important tests is this: A clinician listening to the chest when there are symptoms. A wheeze is heard by the GP with a stethoscope in a very characteristic way and is usually unmistakable. The more episodes with proven wheeze, the greater the likelihood of asthma.

Peak flow meter helps show up obstruction before the child or adult is aware of symptoms. It’s a simple device you can buy directly from a pharmacy. The peak flow meter may be used from around the the age of 5, following the correct technique.

The idea is to write down the readings on a chart both morning and evening for around 2 weeks. There is a typical pattern of variability with asthma. The meter is also helpful in anticipating poor control in those with established asthma – the equivalent of a glucose meter for diabetes.

You may wish to consider allergy testing when there is a seasonal component to the symptoms or concomitant hayfever.

Spirometry is done in the general practice setting & measures airflow differently from the peak flow meter.

Spirometry measures airflow over a full forced expiration and is an accurate way of measuring the degree of airflow obstruction in an individual with asthma symptoms. Spirometry before and after inhaling ventolin is a formal way of confirming asthma in older kids and adults. 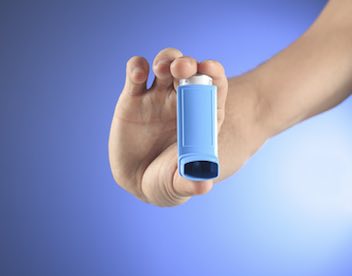 What are the different types of Asthma Treatment?

Think of Relievers (Such as Ventolin shown in this photo) for immediate relief, and Preventers for prevention of episodes.

Oral medication (Montelukast) that is licensed for use age 2 years or older, & being increasingly used first-line in kids for milder asthma

What are the types of inhaler?

There is a huge range of asthma inhalers now available with a number of new devices and inhalants coming on board in 2014.

Each manufacturer produces their own range of relievers and preventers. Each range is characterised by the manufacturer’s device for delivering the inhaler – from the standard Ventolin meter dosed inhaler (press the canister) to the newest devices that deliver the inhalant automatically.

The colour code generally follows this

How does my young child use an inhaler?

An inhaler cannot be used in a young child without a spacer device that sits between the lips and the inhaler. Children under 5 normally need a spacer (age 4-5 might be able to manage without it – but if in doubt use a spacer).

A child under 2 years will need to use the optional facemask with the spacer.

Spacers are sold directly by the pharmacies. There are a range of different spacer devices on the market. Popular ones that include the optional mask include Breathe A Tech, La Petite & Able.

The instructions for use of each spacer are simple. The key point is to form a seal between the spacer and your child’s mouth, and keep the seal during 4 to 5 normal breaths in and out (around 20 seconds).