New Topical Treatments have popped up over the last couple of years. 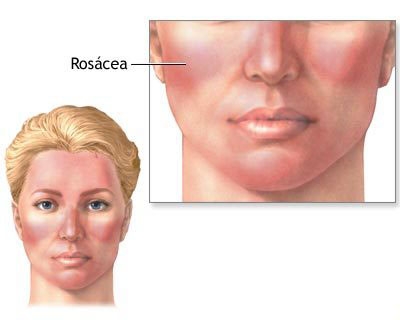 Rosacea occurs usually over the age of 30. The flushing or spots typically occur on the cheeks, chin, nose or forehead. The condition may last for years with times when the skin is much better.

Rosacea is thought to be caused by a reaction to the skin’s infection-fighting proteins called peptides.

What is the typical story of someone with Rosacea?

Some people find that the skin is worse with triggers such as spicy food and red wine. Sunlight almost always makes rosacea worse. It can be tempting to try to get a tan to make the redness less visible but it has the opposite effect.

Occasionally, tests such as blood tests and/or a skin biopsy is required to exclude other skin conditions (particularly lupus).

What are the different types of Rosacea?

The different types of Rosacea look different and are treated differently.

What can I do myself to help Rosacea?

Around 80% of people with Rosacea report worsening with sun exposure. Using sun protection is essential.

Skin Care should be gentle:

Cosmetic foundation with a green base will mask the redness. Avoid heavy or waterproof foundation.

What treatments are available?

Different treatments are available through your GP for different types of Rosacea.

First line treatments commonly used  for the pustular-type of Rosacea are:

Clindamycin 1% cream combined with benzoyl peroxide 5% is another option.

Remember that topical products should be applied to all areas of skin where you get Rosacea – and not just as spot treatment.

Severe pustular Rosacea may respond well to Isotretinoin which is usually prescribed by a dermatologist.

The flushing-type of Rosacea may be treated in two main ways:

Where else can I get support?